An interesting take on indoor wayfinding, The WOW effect from Sweden

We are happy to share a successful project with our platform! We got the pleasure of getting to know two Cognitive science students from Sweden with a great idea. They wanted to include a functional aspect to their thesis about Icon based Indoor Navigation and decided to develop an app that uses proximi.io’s platform for navigation. The result is a very interesting take on wayfinding and here follows Kristoffer Karlsson’s and Arvid Horned’s thoughts about their project:

“Did you know that the apps and tools you use for daily assistance may be bad for you?

Research now point towards that the use of automated processes hurts our skills. When it comes to navigation this is extra clear. Since the introduction of navigational aids such as GPS-tools to the average person inside phone applications, cars and computers people have gotten worse at navigating. Did you for example know that the Inuit hunters that have for ages navigated based on cues in the environment such as snowdrift patterns and animal behaviour, lost this ability in only a generation, just because they were exposed to the GPS-tools. Researchers think that the cause of this impairment is the lack of attention paid to the environment and the lack of wayfinding decisions. You get rich information feedback on your smartphone screen and do not really have reason to look around yourself, the app does most of the thinking for you. You just have to walk or drive.

Since we are studying Cognitive Science we took an interest in this phenomenon. We found that people are naturally navigating by the use of landmarks. A landmark can be things like a hill, a building, a monument, a strange looking tree and other things that stand out in the environment. So we asked ourselves, how can one build a tool that navigates the user by only using landmarks?

We figured out a concept. The concept was developed mainly for indoor navigation, since tools for indoor navigation is getting more common. The concept is grounded in the research that has concluded that landmarks are really important when navigating. Our concept is to guide the user from landmark to landmark by showing them an icon that represents a landmark in the real world. The user walks to the landmark and when they reach it, a new icon is shown.

To realise our concept we developed an application that does this. We used IndoorAtlas to map the building used to test the concept. To get the function to change icons on a specific location we used Proximi.io and their geofences-service. Building the app was really simple thanks to the Proximi.io API. We developed an Android-app and used Android Studios.

The application was named Inavicon. Two activities were created, one menu-activity and one main-activity. Inavicon starts by showing the menu-activity where it displays a start button as shown in picture 1. When it is pressed the main-activity starts. A listener to Proximi.io’s API is created and it listens for position updates and for geofence entrances. 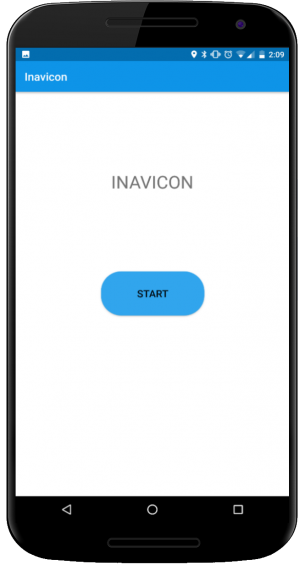 A path is also created. Here a path-finding algorithm should be implemented, but since this is a test of concept in our case, the path is hardcoded. Checkpoints are created along the path . A checkpoint represents a geofence, location and an icon (pictures 2 & 3). The checkpoints are stored in an array and methods for accessing them and their methods are created. 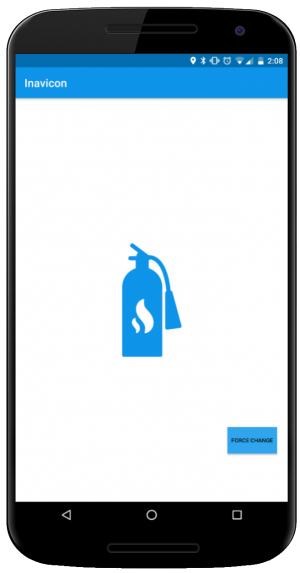 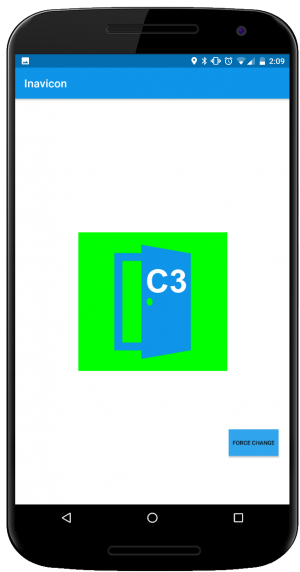 When a proximi.io geofence is entered and the listener detects this, Inavicon compares that geofence name to the expected checkpoint’s name and if they match, an animation takes place (a green square appears behind the icon to give the user some feedback). When the animation is done the app displays the next checkpoint’s icon and the path moves its current Array-position to next checkpoint.

If there are no more checkpoints in the path a message to inform the user that they have reached their destination is displayed.

We tested our app Inavicon by having 25 people navigating a route. 13 people used Inavicon and 12 used written instructions in a text message. We found that every person in the test actually found their way.  The conclusions from this study is that icon based navigation works.

The general feedback we got on our application was that it was nice and pleasant to use. It was appreciated that the app was so clean, since an indoor environment is complex and a map might get messy.“

Go check out their website for even more information about icon based wayfinding at: http://karlssonkristoffer.com/bachelor_thesis/

And lastly presenting their Inavicon – The movie: