Last weekend from June 3rd to June 5th, our Proximi team had the honor to join a talented and passionate community in the second AEC Hackathon in Helsinki. Many ideas were hatched in mere few days, which was fascinating to watch.

One remarkable hack that caught our attention was from team @BIMforAll, as we have mentioned in our most recent blog post about the event. The hack, although still only a prototype, signified budding changes in the AEC industry. In its prototype form, the hack allows users to post tweets and immediately edit BIMs.

The presentation can be found here, filmed by Aarni Heiskanen.

This hack also implies an imminent trend in social media platforms as a multi-faceted tool, and in the Internet of Things. We will try to address all that in this blog post.

But before all that, we would have to tell you a bit about the people that gave birth to this wonderful hack. All the discussion would be later, and you too are welcome to join in, in the comment section.

The team consisted of 5 members, all from very different backgrounds. 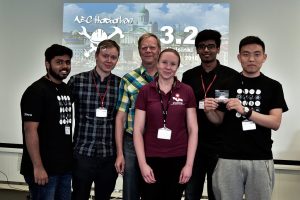 Liu Xi – the one that happily provided us with these information, is currently a Masters student at Aalto University. With a Bachelor in civil engineering, he is now diving deeper into structural engineering, which is one of the reasons why he joined AEC Hackathon in the first place.

Faaz Rafi and Ashwin Agrawal are both Bachelors of Civil Engineering at IIT Bombay – India’s top university according to QS World University Rankings. They are doing a three-month exchange period at Aalto University, and that’s how they met Liu Xi.

Then the team went to AEC Hackathon and was joined by the last two members: Jari Öhberg and Harri Humppi. Jari is a quality manager at Geological Survey of Finland – AEC is virtually his life. And Harri is currently an architect at Arkkitehtitoimisto Helamaa ja Heiskanen.

How about the idea?

At first, the team noticed a gap between the end-user and the company in interacting and communicating with/about BIMs. A solution is needed, and with a team that diverse, great ideas are bound to be born. The workshops and the community of experts at AEC Hackathon also contributed greatly, which eventually formed the hack as we see it.

The general idea is quite simple, as we have mentioned above. BIMs are complex structures of information, but with this hack, a tweet is all that is needed to edit the model and updating changes in the model itself.

In the demo version, the team used Autodesk Revit to process BIM data, and DYNAMO to create the main action flow that provides synchronization between tweets and the BIM. The DYNAMO interface, with nodes and links, creates “ease-of use for the industrial dynamics modeling community”. It really resembles how Proximi.io uses Node-RED to create a click-and-drag interface for geofences.

Here’s one example from @BIMforAll: 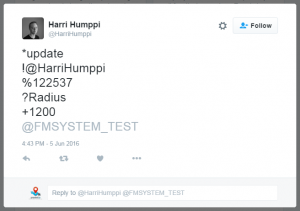 Basically, the tweet above changes the column (ID etc) from the original radius to the stated radius. In the team’s presentation, we were delightfully surprised when the column got bigger because of a tweet. You may have certain concerns about security, that if editing is that easy, everybody will just start editing the models, which will cause a mess. But then, the syntax also requires a username to be keyed in, which ensure authority and responsibility with the models.

Where does Proximi’s API come in? Well, imagine a site inspector, at the site, calling the designer at the office about certain necessary changes in the models. With Proximi, the designer can extract the inspector’s on-site position, and thus they can pinpoint which parts of the wall needs remaking or where safety procedures need to be set up – without any costly miscommunication. 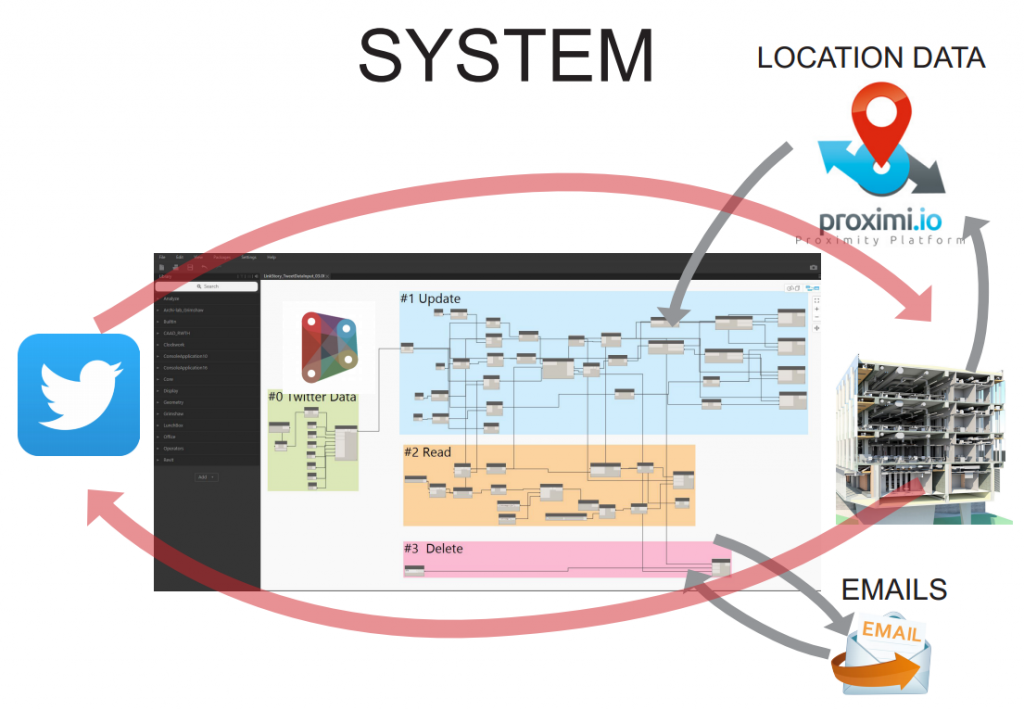 How can this hack be improved? What are its implication?

Currently, the team is still working on this project. When the project is complete, it will be released open-source, or as a downloadable package for free usage.

With all the new technologies at hand, there are a lot of integration possible.

For once, Facebook, Slack, Atlassian and GitHub can all be used in the same way. This implies great power for social networks to employ their power in other industries as well (the AEC industry, in this particular case). Imagine a future where the workflow is managed by one single social platform, allowing easy documentation, communication and update between team members. That was one of the goals of the original hack, and we can see that it still holds great potential.

How about integrating with voice recognition and natural language processing? The hack is now using a specific syntax to edit a specific part of the BIM, which may be time-consuming (writing a dozen tweets can be tiring too, you know!). But, when combine with Siri, the convenience improves: the inspector can now just say an order, and Siri performs the editing. Instead of referring to objects by ID, maybe referring to them by positions.  The possibilities are endless.

Which allows us to come back to the Internet of Things. Back a few years and some may say that the Internet of Things cannot be… a thing at all. But this hack says otherwise. The Internet of Things is not just going to be a thing, it’s going to be a big thing. We have seen many applications within daily life, like turning off lights and switching fan modes, but there are other uses for it as well. The hack now helps in AEC, and in the near future heavy manufacturers will be able to integrate voice commands into production chains. Excursion and exploring teams will be able to send robots to dig for data from their home office.

But all that are still speculation. It takes great people and great execution to actually make all that come true. For now, we are still just truly glad that our tech was employed in this small innovation – during a warm weekend in Helsinki. Thanks to team @BIMforAll, and to AEC Hackathon organizers for such a meaningful event.

If you want to see how Proximi can help you automatically tweet various data, check out our tutorial here. The tutorial is from an on-going series about action flows and different examples/walk-throughs about how they can be used.