We could not be happier to announce that Proximi.io has today closed their first founding round. To make the situation even more exciting, the funding constitutes the first ever Nordic cross-border angel investment round. We are looking forward to the Danish-Finnish collaboration, and, most of all, running Proximi.io with full speed onwards.

Nordic and Baltic investor collaboration, NordicBAN, that was officially established at the beginning of November, has already given raise to the first cross-border investment. Finnish Proximi.io receives a seed funding of 300 000€ from local and Danish investors.

Proximi.io is a startup Järvenpää, Finland, who develops a technology-agnostic proximity platform for location-aware mobile and web applications. The funding round is the first one for the company. The investment syndicate includes over a dozen Danish business angels from Business Angels Copenhagen (BAC) network, three Finnish investors through FiBAN and KoppiCatch business accelerator. The Danish share of the round is 250 000€.

Proximi.io and the Danish business angels, who were visiting Helsinki as FiBAN’s guest, met at the end of October. After a three-minute pitch and a short exchange of words with Hans Jørgen Juncker, one of the angels, the interest was arisen and the negotiations begun.

In just a few days Juncker gathered a syndicate of interested investors. “We see Proximi.io as a very interesting and exiting business case, but we also see this as a great opportunity to start a long and a strong forward-looking cooperation with the Nordic and Baltic Business Angel environment which we will all benefit from”, comments Hans Jørgen Juncker.

“It is fantastic to get international investors into the company at this early stage”, says Proximi.io CEO and co-founder Annina Koskiola. “Our plan is to expand the business overseas at a fast pace, and the international vision and contacts brought along by the Danish investors will be very beneficial in that. On the other hand, it is also great to have KoppiCatch and experienced Finnish investors join the syndicate to balance out and strengthen the Finnish ownership in the company.”

The board chairmen of both business angel networks are joining the syndicate. Jaakko Salminen, FiBAN Board Chairman comments: “Proximi.io’s Nordic angel syndicate is very exciting as the Nordics and the Baltics are internationally considered as a ‘single market’. We hope this will inspire new cross-border investments and we as angel networks will actively share the best practices gathered.” “It is very encouraging to witness the first example of a significant cross border investment amongst Nordic Business Angels so soon after the formal establishment of NordicBAN. This bodes well for even stronger ties amongst Nordic Business Angel in the future”, continues Jesper Jarlbæk, Board Chairman of Business Angels Copenhagen. 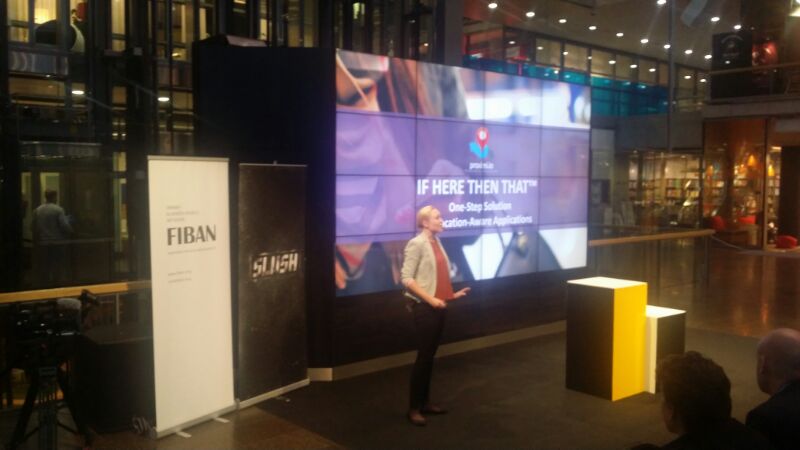 Proximi.io CEO Annina Koskiola pitching at an event hosted by Sanoma, Slush and FiBAN in October 2015.

Proximi.io is a technology-agnostic proximity platform that enables mobile and web developers to easily leverage location information. The platform may be used to target and automatize different action flows that will be triggered when an application user enters a specific physical location. Proximi.io is created by the two founders Annina Koskiola and Mika Koskiola, and a team of four software developers. A beta version of the platform was released at the beginning of September and it has already over 200 registered users.

NordicBAN is a network of startup investor networks in the Nordics and the Baltics. The network allows investors from eight nations in the region to match with other startup investors and syndicate investments in growth companies from Finland, Sweden, Norway, Iceland, Denmark, Estonia, Latvia, or Lithuania. Investor networks involved have more than 2.500 investors and yearly screen more than 3.000 potential growth companies. The NordicBAN investors are members of a local angel network and startups should be incorporated in the Nordics or the Baltics. NordicBAN was officially founded at a signing ceremony during Slush InvestorDay in November 2015.

Proximi.io in use at the AEC Hackathon

Proximi.io in use at the AEC Hackathon
Want to hear more? Book a demo